Organetto. I want to say something about this term, yet without simply using a synonym that might serve to clarify the organological features of a specific instrument, which, over time, has been referred to by the term organetto. I wish to talk about the term organetto and how it is used traditionally in my homeland of Marche. In the past, I was fortunate enough to have been able to work in the Excelsior accordion factory in Castelfidardo, where my duties ranged from office work to production. Assisting some of the workers who were nearing retirement in the factory gave me some of the most significant and important experience for my later life and career endeavours. It did not take me long to realize how much of the work of accordion makers was performed in a strictly traditional manner, and needed to be transmitted from a master craftsman to an apprentice. As does not happen too often in factories, the workers were completely aware of the traditional nature of their work. In fact, they proudly recalled their instructors and their years of training and, at the same time, behind a gruff exterior with seemingly little patience for their young apprentices, they were all desperately looking for the ideal student in order to pass on their wealth of knowledge. I remember how these older workers amazed me in the way that they talked to each other, the terms they used to indicate their work tools and the accordions they built or the individual parts of them. Often the terms they used were in the local dialect but their everyday vocabulary also included some new words and terms commonly used in the field of organology, but used in an original way. Coming fresh from my university studies in ethno-musicology and organology, all of this was simply enthralling to me! As I always do with traditional disciplines that interest me, I did not attempt to collect data and write articles... I tried to learn from these masters. Of course, in order to do that it was necessary for me to be mindful that I was starting from scratch; it required patience and learning by listening, watching and maybe even doing some hard work.

- Roberto, bring me that organetto from the cart over there...
- Sandro, there are no organetto here!
- What are you talking about? I can see it from here! Bring me the piano accordion with 41 keys and with four sets of reeds, and be quick about it!!!


To my surprise I realized that the old workers in the factories of Castelfidardo continued to call any bellows-type instrument they produced by the rather dated and generic term organetto!!! This was a real shock for me. It triggered a short circuit in my brain that had decisive effects on my future career! The factory workers in Castelfidardo called every kind of instrument they produced a organetto, regardless of its size and specifications: they would even call a large and sophisticated chromatic concert accordion with a free-bass system a organetto. Traditional musicians and singers in Marche used the term organetto for any small bellows-type instrument with a buttonboard, regardless of whether it was single action (bisonoric) or double action (unisonoric), diatonic or chromatic instrument; the same thing is also true in Bologna, so much so that the Organetto Bolognese is often a small, double action chromatic accordion with no bass. But the organetto was also the term for the portable organ that spread throughout Europe in the Middle Ages and the Renaissance. The portative organ was also widely used in Marche, where great iconographic works were produced depicting this instrument in the hands of angelic musicians (see Gentile da Fabriano), muses (see Giovanni Santi), Santa Cecilia (see Raffaello), of allegories of Music (see Justus of Ghent) or even as a "still life" musical object (see the inlays of the studiolos by Federico da Montefeltro). There are too many examples for one not to ask himself: is there something that these instruments, which are very different from each other, have in common? If there is a common denominator, what is it? What aspect does it relate to? Is it organological, or related to the intended use or, maybe even... something symbolic? All of the organetti that I have referred to are mechanical aerophones. This means that the sound is produced by a flow of air generated by a bellows. They are all keyboard instruments. Older portative organs, however, were pipe organs while the modern diatonic accordions are free-reed instruments. This extremely important organological difference becomes insignificant if we take into account the intended use of the instruments. Both the ancient pipe organs and the modern reed versions are easily transportable ("portative") and playable by a single performer who, while using the keyboard (or keyboards), simultaneously operates the bellows. Truly, this is no small feature. The ancient or modern organetto is an instrument that be taken anywhere at any time to bring music, dancing, a party, and joy! This is why it became a central part of secular music. As that son of the Marche Gaugello della Pergola wrote in 1462:


This is a fine example from Renaissance-era Marche, as it can still be found today in a traditional setting in Marche! The last terms employed in the first line of each triplet of this poetic piece are: playing / organetti / beautiful women / saltarello!!! (in Italian: sonare / organecti / donne belle / saltarello!!!). Everything has changed, but nothing has changed in Marche for those who perform traditional music.

If sacred music has historically been played at public events in churches with majestic liturgical organs, secular music can be played anywhere, even in places not normally used to hosting its collective Dionysian rites, with a listening audience or, even better, with an audience dancing to the sound of organetto (ancient or modern) and other instruments. Thinking about the iconography, it may seem a bit of a paradox that the ranks of angelic musicians are seen to include the small portative organ, the ancient organetto actually used mainly in secular music, rather than the church organ. We might settle the issue by justifying it on purely aesthetic grounds. Or, we might instead venture a kind of symbolic interpretation. On earth the liturgical organ was and still is the favourite instrument of the Catholic Church, because a single performer playing it can perform architecturally complex, polyphonic music with a continuous sound, or, when needed, accompany the singing. A single individual can perform multiple melodic lines written according to the principles of harmony, the harmony that in earthly music seeks to imitate the mathematical proportions of the music of the spheres that is inaudible to humans. Liturgical music must be pragmatic and always immediately effective. It must always controlled by a capable musical intellect. It is the music of a master guiding the faithful, it is music from an initiate to the art of music that sometimes accompanies and sometimes amazes an audience composed chiefly of the uninitiated, the faithful.

In heaven, things are different. Harmony is constant, extending everywhere at once, eternal. That is why this music is always in unison: each individual performs his own eternal melody on his instrument in perfect harmony with others, everyone is a master among masters, and everyone is part of the harmonious whole of the Heavenly Jerusalem. Each angel or saint plays in proper measure with the others. There is only one master above them all that "governs and discerns" - in the words of Dante - this harmony: the Creator. This is why representations of the music in heaven depict the portative organ, as it is structurally geared towards the ensemble, as opposed to the great organ played by a single and often solitary performer. In heaven, music is played in unison as if it were one, indeed, being one in the light, for the eternal enjoyment of God. Only in heaven will that state of perfection lost on earth be attained. Only in heaven can that perfect, utopian yet multi-faceted, balanced yet free-form, sublime though simple and spontaneous music be played: on earth man continues to reach this dimension through experimentation with secular instrumental music, without ever fully achieving it. What on earth remains Dionysian becomes naturally Apollonian in heaven. The organetto in its various ancient and modern manifestations beautifully becomes the symbol of this upward tension and its various results.

The ancient organetto, which has been out of use for centuries, is for us today the image of an otherworldly and unknown music. In the past it was not so, in the Middle Ages and the Renaissance the portative organ was what produced the "melodia del bel sonare" (to again quote Gaugello della Pergola) that was at the heart "tanto de dolcezza per una bionda trezza, che me ‘l recordarò sempre ch’io viva "(as the restless Antonio da Ferrara wrote in the 14th century). It was thus an instrument for secular music, or perhaps it would be better to term it music of the laity, given the profound spiritual and metaphysical implications never given sufficient consideration in music for dancing and “love" music. It was an instrument for sublime yet tangible, refined but earthly music. In the hands of gifted players such as Francesco Landini, the organetto produced music with amazing effects, such as those described by Giovanni da Prato in Il Paradiso degli Alberti set in 1389: "as the sound began to emanate many birds fell silent almost as if stunned, then pressing in more closely in the large space to listen, they took up their song one more, with double their earlier effort and incalculable earnestness, until several nightingales came one by one so close that they rested on a branch above the head of Francesco and his organetto".

The modern organetto (diatonic accordion) is now more than ever a Dionysian symbol of traditional popular contemporary music. It is an instrument that we can readily find in the hands of players among the "lower classes" (just as it used to be!) in many countries around the world, as recounted in the novel Accordion Crimes by E. Annie Proulx. Even in this case and in this role the evocative power of the diatonic accordion is peerlessly explosive. Even when played in a rote, inexpert manner it is a purely emotional and instinctive instrument. It is the best instrument in the world for producing music that can change people's moods. And thus it places music back in its fundamental role, as was well known to the Renaissance humanists. And along with the music, once again the dancing begins! The modern diatonic accordion is the main instrument used for dancing because it is an instrument that one must move in order to produce sound, you have to dance! In Marche, it is the instrument of the saltarello. And so now the association between Marche/organetto/saltarello is the same today as it was in the past.

So, the organetto: a word that has had many meanings and evoked many feeling throughout the ages. I like to experience these feelings in my place, in my homeland, Marche. This is why a few years ago I also started to play the ancient organetto (portative organ) alongside the modern one (diatonic accordion), performing songs mostly from Marche from various eras, to find an artistic and not just intellectual connection with bygone times and forgotten things. In my music today, I bring together things that I find in books and in the collective memory of my people... just as I found the term organetto used in our traditional way in the memories of the master craftsmen in the factories of Castelfidardo. 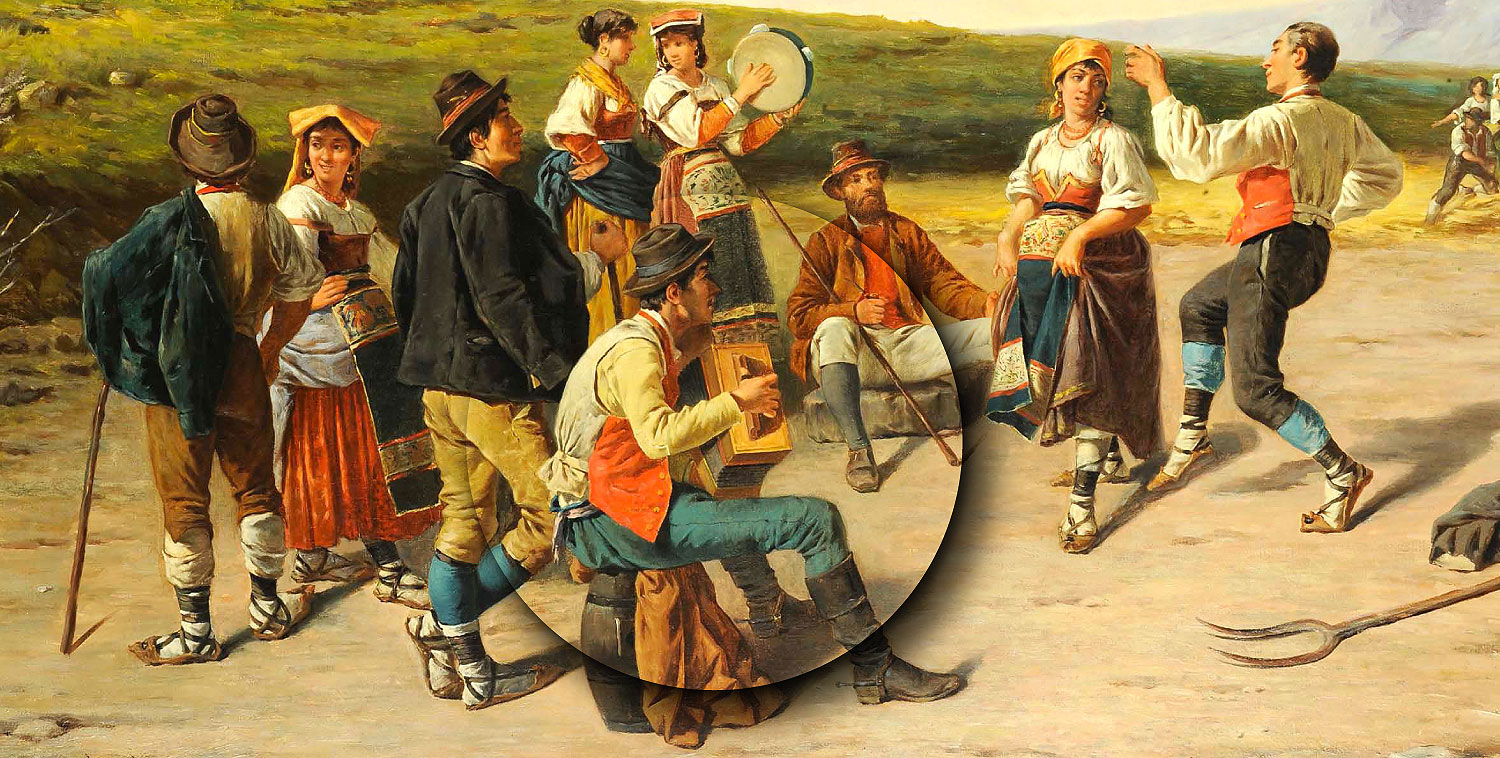